A Baby Boy! (somewhere in Germany) 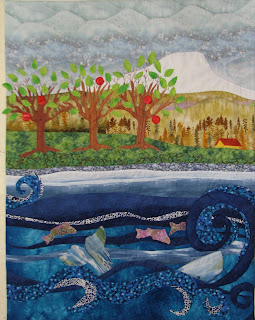 Named Richard Alfred Something and born somewhere in Germany in March 2010, there's a lucky little guy. His mother's cousin commissioned me to create a wall quilt for him. Such a nice gesture!
I don't look for commissions. But, it's so flattering to be asked that I seldom turn them down. (Okay, I'm easily flattered and I also like shiny things...that's how shallow I am.) Cousin A lives in CT. Cousin B lives in Germany. They share a family homestead and many happy childhood memories of Washington State.
Cousin A and I sat down and I took notes about what she hoped I could work into a quilt...she sort of free associated and I wrote: apple orchard, whale watching, salmon, a farm and Mt. Rainier in the background. After a rough sketch she approved the project, concluding that I had all the time I wanted. She thought a baby gift, like a wedding gift, had time to be delivered and, after all the baby was only a couple of months old.
I was delighted that I had the time to ponder and play. Today I have finished the hand appliqued apples and am affixing the hanging sleeve. I'm crossing my fingers that Cousin A's vision and mine coincide or at least have enough points in common that she will be happy with the outcome.
That's actually just to the point on why I don't seek commissions. I really prefer satisfying my own vision. Having another person in the picture just complicates things. IMHO
Oh, I SO hope she likes it!
Posted by Diane Wright at 11:34 AM