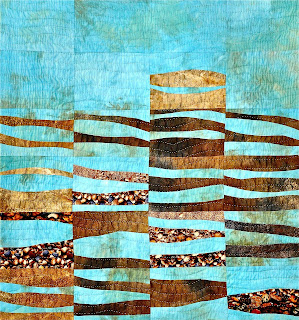 The Thimble Islands is a small string of glacial remains along the Connecticut shoreline. There are from 100 to 365 depending on what one would define as an island and or a rock...and, of course, when the tide is low or high.
Legend has it that Capt. Kidd buried treasure here. Mostly, found today are summer residents, high-quality granite quarried on Bear Island (area distinctive pink granite was supplied for the Brooklyn Bridge, Grand Central Station, Columbia University and the base of the Statue of Liberty), a bird sanctuary and a National Wildlife Refuge.
I guess I've been testing whether I have the "abstract gene" as described by Kate Themel on one of her earlier posts. This piece is titled "Thimble Islands I", just in case I do have the gene, and is 31" x 33 1/2". 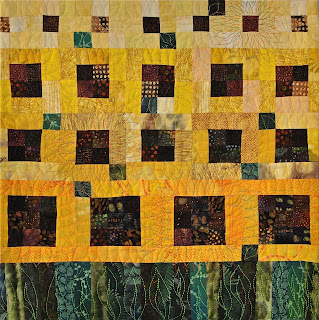 This second piece, which is 20" square, I'm less enthralled with even though it came out just as I had planned. Titled "View from Vincent's Window", I guess it MIGHT look like a field of sunflowers as intended but it might not. Back to the drawing board.
Posted by Diane Wright at 8:59 AM