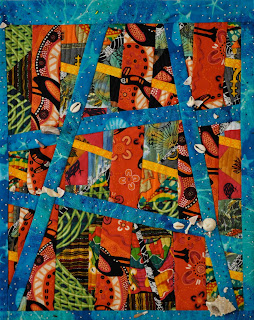 Fiberactions May Challenge: Convergence
I've titled my contribution "Gondwana Revisited".
This challenge required long contemplation on my part. I thought of and discarded several ideas. Finally, reaching back to the dark recesses I landed on "convergence boundaries". As I recall this describes the actions of the earth's tectonic plates in moving and shaping the earth.
Gondwana was a proto-continent that ultimately became Africa, South America, and Australia (and North America, Antarctica, Arabia and part of India). It's the first three that interest me as these all have indigenous ratites: ostriches, rheas and emus.
This piece began life as individual blocks of African, Australian (with emus), New Zealand (with kiwi) and South American textiles. They were cut apart several times with insertions of thin bars of color, ultimately separated by the oceans.
This is such a convoluted, complicated artist statement about such a little piece...it's not "Guernica" after all. But by the time that occurred to me I was too far down the pike to abandon it and produce a substitute for today's deadline. That's the problem with long contemplations.
Posted by Diane Wright at 12:24 PM