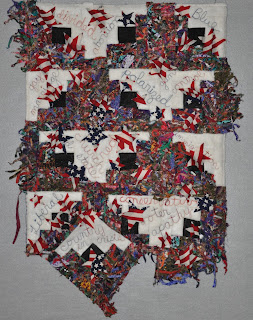 I participate in the online group Fiberactions. Every other month a member proposes a word to inspire the group. This month the word was "texture".
Pictured here is Electorate in Tatters, another of my cathartic creations...or rants, depending on how cynical one is. Using the challenge word "texture" as a vehicle rather than a subject, I put together this piece describing my concerns for our country.
These 13 traditional log cabin blocks represent the 13 original colonies of the US and their roughly 33% of the electoral votes (158) and, coincidently, roughly the percentage of the population eligible to vote in our great nation, that actually opts to exercise that right in national elections.

The 37 stars represent the roughly 67% of the population, undoubtedly self-described patriots eligible to vote, that opt not to exercise their right in national elections. 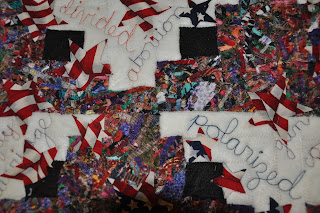 In this detail it's easier to see the multi-colored “logs”, created from a “haystack” of sliced fabrics. The white is wool batt.Both light and dark are dense and highly textured.
The process might be working...I'm less agitated...but I have also been limiting my exposure to "news".
Posted by Diane Wright at 7:38 AM