At least this won't be posted where it has been scheduled for the past couple of weeks.  It's like this:  I belong to an online group, Viewpoints9.  On the 26 of this month we are all due to post our inspiration to Sue Dennis' challenge: Travel to another country...armchair or real...and look at the ordinary with new eyes.  Be inspired by the everyday.

The following is my really long post.  Then I had two weeks to think about it.  I had two weeks because several events occurred that made me postpone my two month sojourn to the West Coast (which is why I was so early with my inspiration in the first place).

As I thought about Sue's words, I realized I'd missed the point totally.  While my post is true...it doesn't capture the ordinary... Kata Tjuta is anything but ordinary.

Rather than waste a perfectly good post, I'm sharing it here.  Stay tuned for the Feb 26 reveal.  This time I did Ordinary...perfectly Ordinary ;^)

When Sue posted this challenge I was all set to work on something inspired by one of our trips to Japan.  For years I have photographed moneki-neko's and dharuma in places high and low.  However, it's winter here in North America, when an old woman's thoughts turn "down-under".

In the late 1980's through the early 1990's my husband's job required him to remain in Australia working on a joint-venture project.  It was a wonderful opportunity for both of us.  I had signed the last tuition check to the last child's university and was 'free' to go.  My visa did not allow me to be employed or matriculate in school :^)  I was really free.  It was wonderful.

What began as an infatuation with a country, its landscape, its diverse culture, and its citizens has become a love affair. This time every year, I wish I were there.  Every 18-20 months, I give in and take the horrible flight.  To rationalize the long flight, I feel we 'have' to stay several weeks.

The desert monoliths Uluru (Ayers Rock), Kata Tjuta (The Olgas) and Karlu Karlu (Devil's Marbles) are icons, recognizable worldwide.  You KNOW it's the outback of Australia.

As my husband (Saint David, my friends say) says, "Sometimes we just have to return to Oz so Diane can visit her heart".

It's not JUST the landscape.  It's the everyday:  The humor. The graffiti.  The food and wine (and beer).  The flora.  Oh, and the birds!

Maybe there's a twelve step program I can sign up for.

I'm sure the irony will not be lost on Sue, a world traveler, keen observer, and Australian. 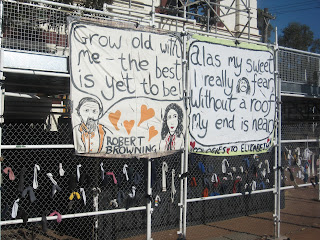