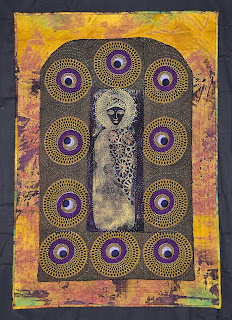 As I reported earlier, Sentinelle began life as a lino-cut by Australian artist, Dijanne Cevaal.  I purchased several of her printings when we met her in Geelong, Vic a couple of years ago.  I had asked her if she had any restrictions on how I used her printing.  Her response was "No".  She wanted her sentinel to circle the earth watching over us all.

This year I entered my Sentinelle into Sacred Threads for exhibit in Virginia.  During it's exhibition there, it was juried into a smaller selection of the Sacred Threads exhibit that traveled to Omaha NE.

Frankly my first unwitting response out of my mouth was an expletive.  Yep.  An expletive.  That surprised me too.  Not because of the coarse word (that's happened before :^/ )….but rather Sentinelle's sale produced that response instead of a big ole 'Whoopee'.

That got me to thinking.  I think I had fallen for Sentinelle.

Back to the drawing board.  Fortunately I had purchased several of Dijanne's pieces.  I am now stitching every evening…remembering Sentinelle.  Now, happy that she has found an appreciative home in Omaha.  And looking forward to her next incarnation.

You too can feel the love.  Check out Dijanne's blog. 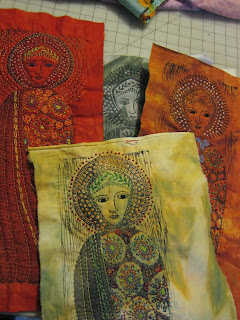