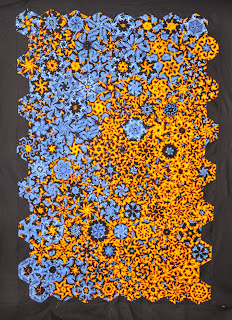 Who doesn't love a kid who knows exactly what he wants? Maybe it's me. (See August 27 post: A quilt for Jinju) Okay, it's me. I just can't resist them even though raising them can be a challenge, grandparenting them is a hoot.

Last month my stepdaughter relayed to me that 8 year old grandson Steven went on a rare shopping excursion with her to a "big-box" store (rare for him not her). Whilst cutting through the fabric aisles he spied a bolt that he grabbed, exclaiming "Do you think Cookie Grammy would make me a quilt out of THIS"? Now, you gotta love a kid who can look at a bolt of fabric...granted it does have dragons and it IS blue...and can see it as a quilt.

Of course it had to happen. Pictured here is "Cosmic Dragons", adapted from Maxine Rosenthal and Joy Pelzmann's book "One Block Wonder encore!"

So that Steven could have some of the fabric in its original incarnation I used a piece for the center of the pieced backing.

Now for quilting, packing and sending off because right behind it waiting is the fabric that his older sister selected for her new "tween room". You're probably not surprised that she knew exactly what she wanted too! 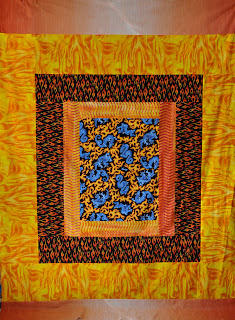