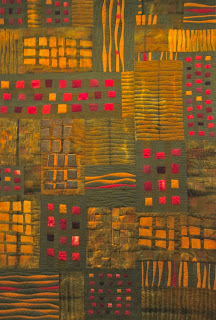 That's how DH described our stay in New York City this past weekend. He's a romantic, but he was referring to the weather. It was wonderful! And, I think it infected everyone from security, to tourists (who were really plentiful!), to cabbies, to wait staff. Everyone was in a friendly, festive mood.
Example: One of our cab driver's radio was playing Mozart when we entered. I commented on how I liked what he was listening to. He said yes, and he thought that it was probably unusual to hear in a cab. I asked if he was a musician himself. He said he was and asked if I could guess his instrument. I could not...with that he began to SING! He was his own instrument. He sang opera...all the way uptown! Gotta love that!
We were in NYC to rendezvous with one of my brothers. He and his wife were celebrating a significant birthday with a cruise to Quebec, beginning in NYC. The meeting also provided me with the opportunity to see Carol Taylor's exhibit at Art Quilt Gallery next to City Quilter.
Here are two of the pieces in her collection. I've long been an admirer of Carol's work.

The second reminded me of the photo that I had taken the night before from our hotel room.
We had a wonderful weekend...NYC at it's best. 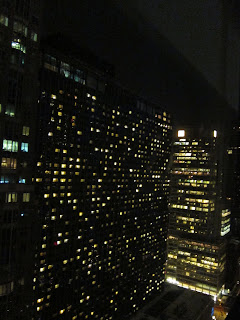