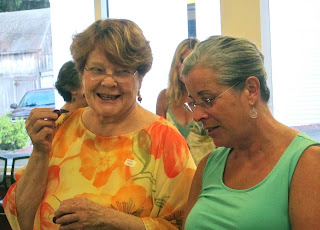 Double Take, my art quilt group's (Sisters in Cloth) collaboration with photographer Rose Alpert, came down from Haskins Labs at Yale last week and was reinstalled at the Guilford Free Library. Last night was the opening reception...and a grand one it was!
Okay, you can tell by all the big grins. What we didn't capture was the size of the crowd. This was certainly our best received exhibit both in terms of comments about the work and the number in attendance.
This first pic captures me in one of the rare (NOT) moments that I'm not talking (or eating apparently). Beside me is Stephanie, Rose Alpert's sister, who was filling me in on a pretty funny story about Rose. 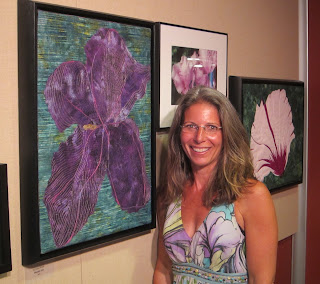 And this second pic is Rose herself....who also didn't stop grinning all night. And who could blame her? Her work shone. Here she is between Robin Wolek's Purple Iris and Janine Anderson-Bays' Cyclamen Glory.
Later she ran into an art coordinator at a large facility in a neighboring town who had seen the exhibit and asked Rose if Double Take could travel there this fall! I think Rose is grinning STILL. 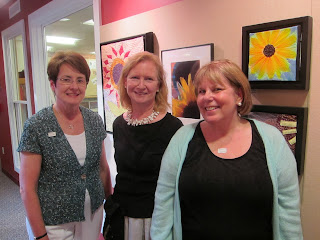 Then there was the first sale of the evening. I think you can tell who just got a check: The biggest grin is on Debbie Bento's face, having just sold her little sunflower (to her L). Also pictured is Debbie's childhood friend (also named Deb) who drove over an hour to be at the reception. On the far left is Yvette Howard.
It was a wonderful evening.
Posted by Diane Wright at 9:51 AM