Quirky: How does it fit into one's body of work? 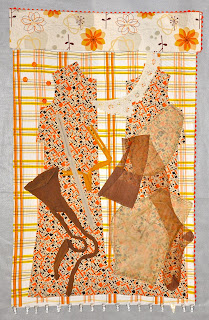 I have a question for you who might know.  Where does the one off, quirky piece fit in your body of work?

I like to collect vintage textiles.  I sometimes incorporate them in my work, although, with the exception of rick-rack, anyone else would not know that they are there. 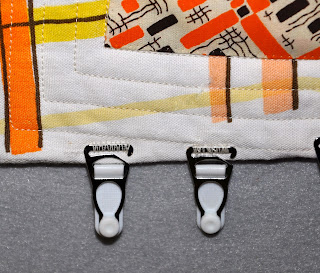 This is different.  I 'found' the vintage shift (cut out from a pattern but then abandoned...just as you see it here) and, at some other time, I 'found' the decorator's yard of plaid seen as the background.  These two lived on my design wall together for months.  Slowly it occurred to me that The Shift that I remembered and wore in a much smaller size than I do now...but not as small as this...was popular during the late 1950's and the early 1960's.  Just around the time that nylon stockings were going out and pantyhose were coming in...about the same time women began to sew their own clothing less often...and, interestingly, the cusp of vinyl zippers replacing metal zippers.

The piece really took off after I discovered these garter snaps that I had stashed away in some distant past.  (My granddaughter can't figure them out.  ;^)  But then who'd want to?)

So, just where does this fit into my body of work?  I'm thinking about reserving a category for Quirky.  Whatcha think?
Posted by Diane Wright at 11:25 AM