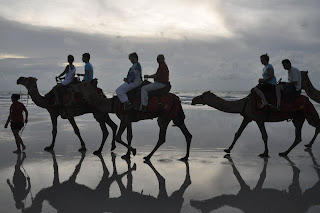 One of the major "have to do"(s) while in Broome is a camel ride along gorgeous Cable Beach at sunset.
As you know, the Top End is currently in "The Wet"....an Aussie understated description of the weather Jan-Mar. We know the sun set...somewhere behind the vast, slightly circular swirling cloud clot...but it didn't dampen our enjoying the experience a bit. DRW and I are the riders on the second camel...an affable, apparently brainy, Alpha Camel want-to-be named Joe. 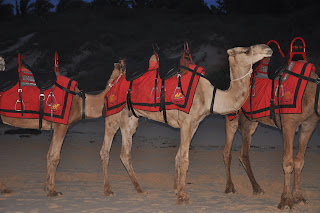 This is Joe. He was one of the few camels purchased after having been trained. Most are rounded up from the 1.5 million feral camels that have become too populous in the Northern Territories. These numbers have grown since being released at the end of the 19th century. They were brought here during the development of the railroad (mostly) and then released into the desert instead of returned. Apparently the Australian deserts were just the thing for their flourishing...without disease or interbreeding...yielding a very robust creature that is sometimes sought by other camel countries to strengthen their herds.
Joe was formerly worked at Uluru (Ayers Rock) and became available for sale a couple of years ago. He seems very happy...seeking head scratching from the riders in front...he also knows that the lead camel, Ashwan, carries the cache of carrots used for the reward of a successful journey down the beach. 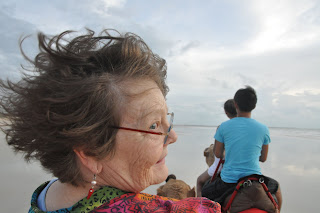