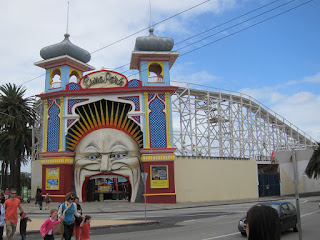 Reinforcing our "fright-flight" response we finally made our way to Luna Park. No, I did not go in...neither did DRW. It's famous. For some reason all those years ago when we lived here we never made it here. It is now in our "been there...almost done that" file.

Yesterday, having been invited to an art quilter's home for dinner on Monday night ("Oh, just take the 109 Tram right in front of your hotel...text me the prior stop and I pick you up"). We have been jumping on and off the City Circle but haven't actually bought tickets and ventured on the "real" trams....where the other riders might like to get to work, etc...without the bumbling tourists mucking things up. SO, we decided to trial the real ones...and headed off to St. Kilda's Sunday Market on the Esplanade. Yes, we had queried the concierge (yes, the hotel has one) about the finer points. 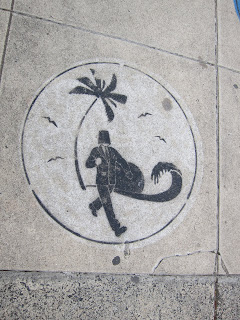 There were many artists and crafters selling their work. We met the artist who had created Mr. Bucket. He has created an Everyman...as he describes...a Cary Grant type with a bucket on his head. Yes, I did ask him about the Ned Kelly reference...and I was "spot on". There were numbers of images on t-shirts, etc...Mr. Bucket with missives flying out of his pockets (wikileaks)...walking on a "red brick road"...interesting imagery.

After lunch we "trammed" back to the city. Since DRW discovered that he would require a couple more shirts we stopped at Myers Dept. Store. Thought this was good. Remember that the Aussie $ is almost exactly the US$. The Ralph Lauren t's are $149 EACH!

It's the shipping I guess. 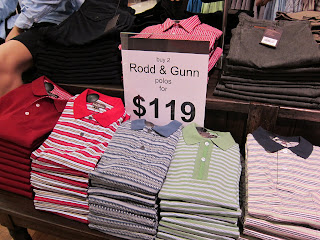