Creative spirits living in my studio 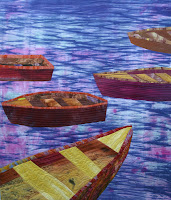 Last week I agonized over cutting some exquisite hand dyed fabric.  Besides my attention wandering off to "Crow", I was moved by Elizabeth Gilbert's wonderful YouTube talk.  She might be right about actual creative spirits.  In my case,  I think they are lurking in the corners of my studio. I've always thought that talking or words, with or without music, were not conducive background for me when I'm working.  I need my surrounding to be quiet so I can hear those creative spirits' small voices.
My "boats", that I have variously painted over the years, came to fruition in fabric this week. The work is inspired by a piece of shibori that I bought from Sunny Bunny Designs the week previous.  I, indeed, did not want to cut it.  Instead, I pieced my boats from hand dyed and painted fabrics collected over the past 15 years.  They, in turn, were pieced into the shibori wholecloth.
The resulting work represents one of those rare times when what is created comes very close to the image in ones imagination.  So, thanks, to my resident creative spirits, Boats at Slack Tide is in.
Posted by Diane Wright at 1:18 PM 4 comments: 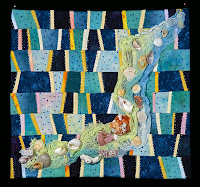 ARTQUILTSTransitions acceptance!
I was so pleased to receive an acceptance email from PAQA-South yesterday!  High Tide was selected.  Unfortunately I will be unable to attend the opening reception as I will be out of the country.  However, my son who lives in nearby Raleigh will be able to see the exhibit "live".  He doesn't often get to see my work in exhibition...and he's one of my biggest supporters:  an early collector of my work.
Posted by Diane Wright at 1:05 PM 4 comments:

Gestation? Incubation? Birth of an Idea

Incubation or Gestation?
I think incubation pertains mostly to eggs and viruses and gestation mostly to mammals. Which word would one use for an idea?
Usually I have couple of ideas that I'm planning to use in a quilt hanging out in my head.  It can take weeks and months for the idea to manifest itself.
The case in point:  I have had an idea that I explored with paint and canvas off and on for more than thirty years.  Basically, calm water with still, unmanned, moored wooden boats.  This past weekend I stumbled upon the background, a piece of hand dyed shibori perfect for the calm water yet complex enough to suggest reflections.  Whilst I interviewed other hand dyes later back in my studio for the boats fabrics, I happened upon a misplaced, small technique study for reverse applique that I had played with almost ten years previously.
Apparently I'm easily distracted when I'm ambivalent about cutting gorgeous, one of a kind, hand dyed fabric.  I became completely absorbed in the "new" project.  And, surprisingly, convinced that it was the background for yet another idea that I had "incubated" and abandoned out of lack of inspiration:  crows.  Go figure.  I didn't even know that the crow idea was still inside there!
Here's the crow.  Now back to the boats.
Posted by Diane Wright at 9:57 AM 2 comments: 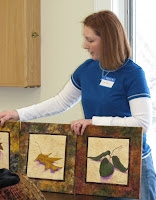 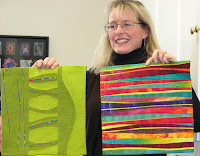 My very first blog post.  How happy am I?  I don't want to count the years that developing a website has been one of my New Year's goals.  However, a blog has only been on the goal list for a year...so there's progress.
The art quilt group that I belong to, Sisters in Cloth, annually hosts an intimate winter gathering that we call an Extravaganza.  And in the interest of honesty, it's a concept and title that I brought with me when we were transferred to CT from FL.  One of my FL groups (Gone to Pieces) had a long tradition of a similar annual event.  When I was bereft of quilting buddies, I formed a quilt group from the local Newcomer's Club.  Since 2000 we have morphed into our own art quilt group of thirteen...and holding.  We meet weekly in members homes and have become Sisters in Cloth.  We are always on the hunt for new venues for our work....local libraries, restaurants, clubs...
Back on subject.  Saturday was our fourth annual Extravaganza.  The day was cold and sunny outside and warm and sunny inside.  I'm posting two of the pics I snapped during our Show and Tell...one of the highlights of the event.  Kate Themal (one of our invitees and co-rep for SAQA) is showing three of her wonderful leaf creations.  I'd seen them on-line before...but they are even better up close and personal!  The other pic is my buddy Vivika Denegre displaying two of her works inspired by a local glass artist's work (Barbara Kerwin-Shulman).  The two of them along with a weaver are preparing for a three person show in May.
The day began with coffee and...whilst everyone gathered.  This year everyone brought two nine patches for a charity quilt.  Usually our group asks for an original block that we exchange amongst ourselves, but this year charity seemed more appropriate.
Trish and Owen Hodge who are Batik Tambal gave an informative talk about their travels and textile collecting in Indonesia and Syria.  Of course they had exquisite panels and batiks that we freely looted and plundered.  They weren't the only vendors:  Laura Wasilowski (ARTFABRIK) and Roni McCullough-Sheppar (Sunny Bunny) sent boxes packed with delicious hand dyes!  Our own Ruth Anne Olson offered her hand painted and dispersed fabric.  Nearby fiber artist Karen Loprete brought her work (and incredible pet portraits!) for us to buy and wonder at.  Dorothy Meyer, a local beader brought work.  Oh, you just know the 22 attending were atwitter! Just think, everything that makes a quilt artist's heart beat strong:  good friends, good food, great show and tell, vendors and a mini-workshop by our own Vivika and Barb Adams!  Boy, it doesn't get better than that!
I don't know how frequently I'll post.  Despite the "core dump" you've just slogged through, I worry that I have nothing to say.  Hmmm, maybe I can get over that worry.
Posted by Diane Wright at 10:15 AM 5 comments: