This, Challenge #8, was a toughie for me.  Viewpoints9 member Lisa-Maire Sanders asked us to consider a preconception and depict it in landscape form.  Preconception!  Really!  Where does one begin?

In reality, I try NOT to have preconceptions.  I work at it.  Now, I was to actually think about preconceived ideas and their results...and be inspired.  Really?  Hmmm.

One of my earliest preconceived ideas that turned out to be very wrong occurred when I was five.  (I have a pretty good memory.  I remember also not liking to be wrong....even then)  My father was transferred from Andrews Air Force Base in the DC area to Carswell Air Force Base outside of Fort Worth, Texas, just after I finished kindergarden.

As we settled in, I remember thinking 1. it was really dry, 2. not many people lived there, 3. it was pretty flat and 4. there weren't many things growing there.  This, of course, is comparing a major metropolis to one that was not in those days.  There followed months without rain.

Then it rained!  Oh, my!  I was stunned with the tiny flowers that began to bloom on what had previously looked like pickled grass.  A stream formed at the bottom of our property where none had been when we moved in, and shortly, it was full of crawdads!  I was so surprised that I could have been so wrong.

Okay.  This is ancient history.  Kid stuff.  Except that I took away how wrong one can be.  My first memory of a preconception and how it might be good to avoid having them.

Posted by Diane Wright at 8:30 AM No comments:

My art quilts will be on the road this summer!

Our SAQA/CT regional traveling exhibit Local Color will be installed at The Legislative Office Building in Hartford CT July 1-31.  That includes my Thimble Island Abstract and Town Green.

Next up, one of my as yet unselected pieces, will travel to Kagoshima Japan as part of "My Favorite Season" exhibit during the 12th Annual Friendship Quilt Show in Kagoshima, Nov 22-24.  This exhibit was organized and supported by Jen O'Brien of Sew Craft.

And for reasons beyond my IT abilities, blogger doesn't want to load any more images.  And I'm too darn busy to worry about it...back to the studio! It really is square and true.  I took this pic with my iPhone and I think I must not have been spot on in front and it looks wonky here.

I'm taking the opportunity to  post now as it may be a miracle before I get to it again in the very near future.  Not a walking on water miracle...more a win the lottery miracle.  Mere mortals CAN, they just DON'T very often.

Under the column I had previously checked: "stop me before I volunteer again", I reneged and I volunteered to be the Exchange Director for a cultural home-host exchange from Urla Turkey's Friendship Force International's club to our club here in Southern CT.  We have never hosted in June and now I know that there are really, really good reasons for that.  No one is available to help!  We are a small group to start with and, to pull off a successful exchange, a very active critical mass of members must dedicate themselves to the various tasks.  With the school year extended until the last week in June, and the usual graduations, weddings, get off to the vacation activities...there is little interest in helping pull this off.  I have hosts, and a mostly confirmed itinerary developed.  D Day approaches.

It also happens to be time to take down SAQA/CT's Local Color from it's first installation at the Ruth Haas Library at Western CT ST University. I am to bring the entire exhibit here to my house and keep it safe until it has to be delivered to its next venue.  During the home-hosting, the exhibit has to be installed at The Legislative Office Building in Hartford.  There's that miracle thing again:  being in two places at once.  That one I CAN'T pull off.  Something has to give or someone will have to give me a hand.

As I posted last time, I have been using the odd times that I've had to be in my studio to cut and piece, trying to get back in the groove.  This piece is the latest.  It is a 'disappearing four patch' that has been layered with all sorts of colors and sizes of vintage rick rack from my sizable collection.  Makes me smile.

Sayonara for a while.

We have been back from our sojourn West for several weeks, but I don't seem to be able to get back into a creative groove even in my studio.  I have had many other items on my 'must do' list which took precedence over my regular duties.  Still, I missed creating.  I decided that when time was available I'd just start cutting and piecing and see what happened....keeping in mind that I do have to have inventory available for sale at November's Shoreline Arts Trail's Open Studio Weekend.

The first thing that came together was a baby quilt.  Because it has a transportation theme it might work as one of my contributions to Sisters in Cloth's next exhibit:  On the Road at the CT Department of Transportation's Office in Newington CT this July.

I haven't decided which side should be shown, if, indeed, I do decide to offer it to the exhibit.  What's your thoughts?  Obviously that will make a difference for putting on the sleeve to mount it.  And, the label, too I guess.

Or maybe I should just forget this for the exhibit...go for something all together different and more artful.  Hmmm....thinking....thinking....slowly..... 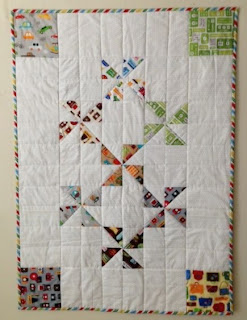 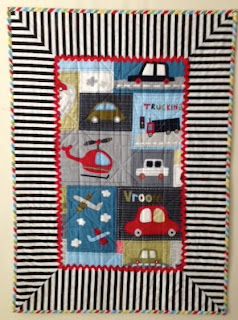 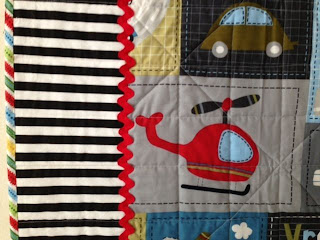 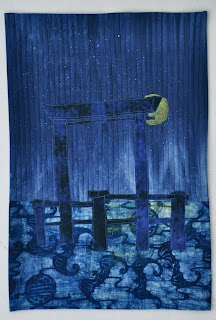