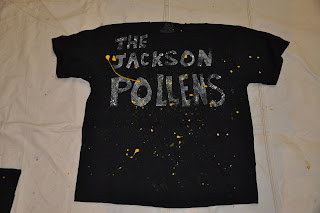 It's Spelling Bee Season!  Next Saturday right here in our little town, with the high school auditorium filled to capacity, the 6th annual Spelling Bee will entertain us all.  No kidding.  It's a big deal here.
And, it's not just because there's nothing else to do...that's beside the point anyway.

The Guilford Fund For Education sponsors the event.  You would be surprised at the interesting teams that compete.  One year a physician's team, Bowels & Consonants, won for Best Costume...yep..costumes!  That was the year that my husband's team from Guilford Art Center, The Not So Artsy Fartsies, did not win (don't ask).

This year The Art Center's team is going as "The Jackson Pollens".  The theory on this one is that "no one does pollen".  hmmmm.

My buddy Yvette, one of the other team members, was asked by The Art Center to create the T shirts.  I told her I would help.  After all, it's the least I can do.  I don't spell well.

I cut a freezer paper stencil and ironed it onto the three shirts.  After the lettering had dried, I enlisted my resident artistes to spatter the pollen.  They had a hard time believing that it was A-R-T...told them we'd acquaint them with the Real Jackson's work.

Tomorrow we will spatter the back before returning all to Yvette, who has made iron-on logos for the back.  Add black berets, and, viola!(and, yes, I DO know the French is voila...but I never actually say voila..I always say viola..because I don't speak French...besides not spelling)  a team is created.  Fingers crossed that they win their "hive" again this year.  Too bad I will be in Philly at the SAQA/SDA conference and will miss the whole "buzz". 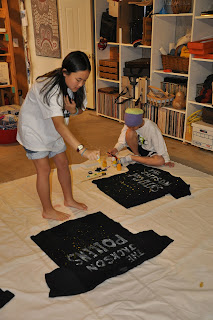 WAY too much fun!

Yesterday was the annual Extravaganza hosted by the art quilt group that I belong to, Sisters in Cloth.  It began, hmmm...maybe 9 years ago, because we were tired of winter, weather canceled meetings, dreary skies and the lack of fiber events.  We decided to host a day of all things "quilty" and invite friends.  We wanted a big Show and Tell, a day with friends who were not in our membership and, of course, lunch.

Over the years it has become more.  For several years now, we have invited speakers and vendors.  Usually the vendors simply send us a carton of inventory which we sell for them, returning unsold along with the proceeds.  So it has turned into a much anticipated event:  Inspiration, Fabric AND Food.  Definitely a winning combination.

Our fellow member, Vivika DeNegre, the new editor of Quilting Arts, invited her new colleague Cate Prato, editor of Cloth Paper Scissors to the party.  We were very interested in the shirt that Cate had printed with many found objects...fitting perfectly with our speaker's topic.  Jane Davila gave an incredibly informative slide presentation.  Actually, I wouldn't mind hearing it a second time...it was that interesting.


The vendors this year included:  1) Jane Davila who brought all the new amazing printing, painting, dyeing stuff and books that one would ever need (seriously).  Plus she was there to answer our questions on how to use it.

2) Mickey Lawlor (Skydyes) sent her incredible hand painted cottons which made several of our hearts race.

4) Karen Loprete brought a ton of her colorful work.

5) Our very own Carol Ludington brought a mountain of cotton that she had ice cube dyed!  I don't think she sleeps...if you check out the Sisters in Cloth blog site you can see a photo of both the fabric and Carol.

We all are grateful that our hostess Yvette has such a generous spirit.  She opens her home to us after spending days staging it so that everyone can enjoy the speaker, the lunch, the Show and Tell, the vendors AND, of course, catching up with each other.  Thank you, Yvette!  You are the BEST!!

This piece, 28” x 34”, was created in response to the latest Fiberaction challenge to work exclusively in a monochromatic color range.  I chose blue and decided to also continue to work on my current series:  Ode to Australia.  It was very difficult not to give in to my color urges....I SO wanted to add a little yellow, just a tad of orange.  This WAS a challenge.

I wanted to add volume to the wonky log-cabin blocks and in this series I have figured out how to manipulate the fullness so that it's (mostly) where I want it.  Here it was in the dark blue sections, to reinforce the idea of mountains.

The other bit of "play" I did was to sketch a figure to represent the European explorer in my narrative and transfer it to cotton.  While I've printed photographs I don't think I've ever tried a sketch.  I pre-soaked the fabric in bubble-jet first....you never know...I just MIGHT want to revisit this and add COLORs to my monochromatic piece ;^)  And, if I do I wouldn't want the sketch to run.  I had a bad experience in the past with a photograph running (turning into a marbling project) when I sprayed the completed piece in an effort to square it up more precisely.  Totally ruined the whole darn thing.

The Blue Mountains in New South Wales, Australia, is roughly 3900 sq. mi. of sandstone plateaus and gorges, rich in coal and shale.  The range was named this by European settlers because of the blue tinge the range takes on when viewed from a distance.
The Aboriginal people who had inhabited the mountains for several millennia, the Gungdungurra, believed the mountains had been created in the Dreamtime when Creator Spirits fought an epic battle leaving the scarred landscape.
It is believed by many that the first European to cross the Blue Mountains was a former convict, John Wilson, who was freed in 1792.  He settled in the bush, and lived among the Gungdungurra people, who, he said, guided him through the mountains.
Evidence of Aboriginal habitation is found in many areas, notably Red Hands Cave, a rock shelter containing hand stencils from adults and children.  The hand prints are believed to have been created 500 to 1600 years ago. 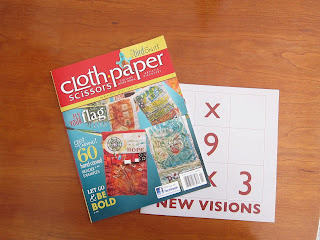 There's just something about deadlines.  Maybe at some level it's a wish to slow time down, delay the inevitable...put off the pain.  Whatever.  Aside from the deadlines for calls to enty in March, I have the April ones to meet prior to my departure the first week of April for Australia.  Of course, some deadlines will not  be met.  During my paralysis of indecision, I have used my preferred delaying device, procrastination, to advantage AGAIN.  I cleaned and rearranged my studio.  Yikes, that hasn't happened in a very long time.

I was able to take this photo on my usually over-stacked desk-top.  The magazine and catalogue are lovely gifts from my friend Yvette Howard, one of the members of the art quilt group that I also belong to, Sisters in Cloth.  We had been looking for this issue and she found it.  The last two copies at a nearby store.

Martha Wolfe is the "cover girl" on this most recent issue of Cloth-Paper Scissors.  She participated in The Prayer Flag Project, initiated by another member of our art quilt group Vivika DeNegre.  Martha is a former member who we love to invite to participate in our challenges, even though she has relocated to Florida.  She does such interesting work!   The article featuring the project was written by Jane Lafazio who, I guess, is spearheading the Prayer Flag Project.  It is a very inspiring premise and has produced some indelible memories.

The catalogue is from the Textile Study Group of New York's exhibit 9X9X3 which Yvette and I managed to catch the day it was being installed in the Durst Building on Avenue of the Americas in NYC.  It was very interesting to see the small jewels of detailed work.

I don't think Yvette even knows that she was enabling my procrastination.  I was able to spend no small amount of time pouring over them both.  I won't tell her...she'd feel guilty and I won't want that on my conscience :^)

Today is LAUNCH day of viewpoints9, a group of international fiber artists from five countries answering challenges posted by members.  Over the next few weeks, we each will post our reflections and, hopefully, progress on our projects.  On the 26th of April, our first Virtual Gallery Opening will be held on our blog.  Each artist will share her creation (18"x24"), as well as her reaction to the challenge.  Then the whole starts all over again with another challenge.

While excited about the prospects, I've been a bit overwhelmed with the august company I find myself in and the more intellectual component of the challenge.  That and I'm a techno-phob.  Other than that, the only problem I can see is....well...the first challenge:  Music.

I know it's heresy, but, really, most music is just a five letter word for me.  I never recognize whatever is playing.  Oh, some of it gets my foot tapping, or, worse, my body moving...but remembering the music? Not so much.  Except for Aaron Copland.  I love Appalachian Spring, Rodeo and his Fanfare for the Common Man.  Actually, unless it's one of his pieces, I really don't recognize much, hence the title of the piece above that I made many years ago.

So as the next few weeks go by, I'm hoping that something really, really wonderful and unusual happens for me.  I hope I'm inspired by music.  Alternatively, I'll be listening to a lot of Copland.
Posted by Diane Wright at 12:59 PM 1 comment: