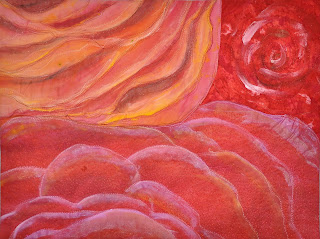 My art quilt group, Sisters in Cloth, has been invited to exhibit our latest project Double Take: Photo and Fiber at Yale University's Haskins Lab in New Haven beginning February 1.
Our project was a collaboration with photographer Rose DeLucco-Alpert whose gorgeous work will be hung along side our interpretations. We chose 15 of her botanicals to interpret in fiber. (Three of us have chosen two of her works.)
This is my Roses, along with a detail (below).
I painted the fabrics and machine stitched, using free-motion zig-zag in one rose to create more texture in the nearer flower. 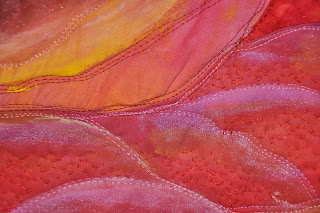 The second photograph I selected was Water Lilies. In this one I free-motion stitched koi swimming beneath the lilies which were not actually in Rose's photo but I imagined that they should have been. I know she won't mind...she is looking forward to the "interpretation" part of the challenge. 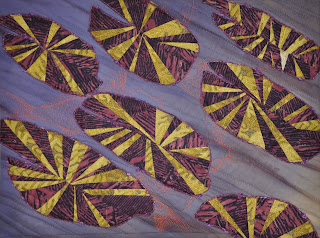 Check out Sisters in Cloth and Martha Wolfe's blogs for more great images and information. 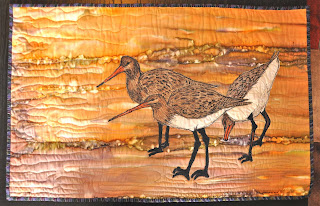 Godwits at Hammonassett
This is another art quilt that is in my son's collection. The godwits are thread painted on a piece of batik. I liked this one too and thought that maybe I should return to sketching and to doing a bit more thread work.
This little trip through time via my past art work has been very helpful in nudging me back into the studio. The studio that has not been worked in for a very long time. With all the guests and travel during the past 2 1/2 months, it's little wonder. I loved hosting and our trips...but I VERY much need to get back to work.
Posted by Diane Wright at 9:18 AM No comments: 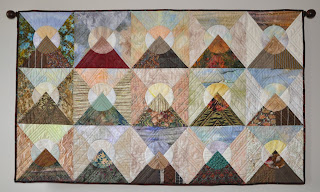 I made Many Moons several years ago as a gift to my son (and his then wife....don't you hate it when you get blindsided?). I'm pretty sure it was inspired by something that I'd seen that Ruth McDowell had done. At least that's the picture that's in my memory...if I'm wrong, I'm sorry to whom ever I SHOULD have credited.
DH and I drove to Raleigh NC to help him relocate into his new townhouse. It was a fun, very busy weekend. We selected window treatments, bought rugs, hung artwork and organized the kitchen. Phew! One of the really nice things that happened was that I was reacquainted with some of his artwork that had been in storage....reminding me of all his artistic abilities that showed early on.
His relocation included moving all the artwork I had given him over the years too. Many Moons is now hanging in his new dining room and looks smashing (I say very immodestly). I like it so much I may make another....similar but never the same, of course. This one has tie silks, kimono cottons and silks, taffeta and some pieces that I treasured from long forgotten projects.
Posted by Diane Wright at 2:01 PM 3 comments: 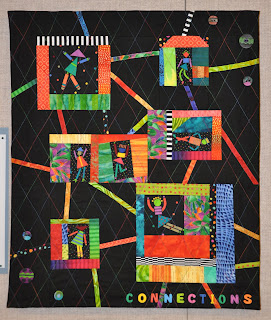 This first photo is a shot of my friend Yvette Howard's Connections, her interpretation of our group's most recent challenge to create a piece inspired by "word". She always does crisp, sharp work...and in this case...a bunch of fun. You can't help but smile when you see this. The base fabric was designed by Jean Ray Lawry whom Yvette and I were lucky enough to meet and hear speak a few years ago. If you want to see some happy work check her out.
Twelve present and past members of our group Sisters in Cloth participated. This time we decided to mount our work on stretcher bars. It certainly made for a very easy to hang exhibit!
The thing that strikes me about this collection is how broad the subject matters are. Granted two relate to the judiciary: Gail Kotowski's Justice and Evelyn Judson's Testimony, but the rest span from my rant on the demise of newspapers, to the beauty of nature, to the passing of people in our lives. It is very interesting.
So, if you are in the area stop by the Guilford Free Library, 67 Park St., Guilford CT on Thursday, December 9, 5-8pm for our Opening Reception. We will be joined by the friends and patron of two other artists, Mark Janke and Mary Ann Flick, photographers whose work will be on display in the libraries outer galleries. The exhibit will be up through December. 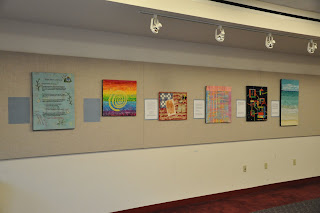