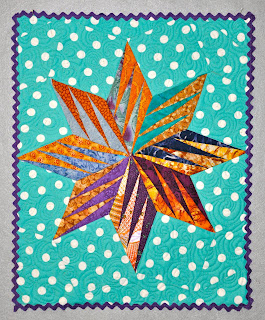 This month Fiberactions challenge word was transformation. I wasn't inspired until one of the group's members completed hers a full month ahead of the deadline. Doesn't seem fair that there are those overachievers.
That was the push I needed to start playing in my fabric with transformation in mind. I discovered 8-9 paper-pieced Lone Star Block parts, leftovers from a long-ago completed fundraiser. Fodder for transforming I thought.
The Lone Star just naturally lead to my thinking about my life in Texas.... and other locales... I remembered the effect/affect those locales had on our family. I thought about all those people I knew who had adapted to their new surrounds and cultures.....and those who had gone a step farther and adopted these new identities. Really transforming their lives.
Case in point: I have two brothers, a sister adopted from Japan and several friends who also not from Texas. In fact, they may have spent decades in various other places. But that doesn't diminish the degree to which they would identify themselves as Texans. Maybe it's a "cowboy" thing.
I do know that place and culture can have truly transforming effects.
Posted by Diane Wright at 7:52 AM