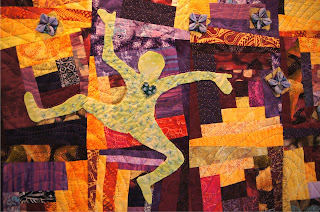 We leave for Australia, first stop Melbourne, on Feb. 14! I'm blogging about it a little early for a reason. I'm hoping that there are Aussie readers out there in blogland who will be kind enough to tell me "what's happening" in the art world, especially the fiber art world.
We begin our journey in Melbourne for a couple of weeks. We'll have a car and hope to visit various old haunts in Victoria before we fly to Broome on Mar 1 for a week.
We've never been to Western Australia. Sad, I know. Hard to believe...and soon to be remedied ;^). Eons ago I represented some Aboriginal communities in promoting their artwork in the US. (It's one of those careers mentioned in my profile which was not so successful....but very enjoyable.) I've been to many remote communities, camped in some very interesting places, and met some incredible folk but there's one place that I've never been and I really, really want to see....the Bungle Bungles.
But I digress. Our next stop will be Perth for a week, then a week in Adelaide, before we return for some more visiting in the Melbourne area. We return to the US March 30.
I'm hoping to meet Dijanne Cevaal in Geelong (where we will spend several days as we used to live there). I'm going to become the proud owner of some of her books, of that I'm sure. I've heard from Gloria Loughman...who will not be on the Bellarine whilst we are there. She'll be in the US!
Oops, another digression. The real point (and there is one) is that I don't want to miss anything. Wouldn't it be sad to have gone all that way and miss seeing or doing something?
And the image above? It's a detail from "If I Hear Music It Must Be Copland!" that I made in 2004 and joyously expresses how I feel at the prospect of several weeks "Down Under".
Posted by Diane Wright at 7:35 AM